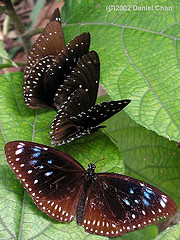 Autumn came late this year after the hottest October on record. Only when it suddently got cooler these days that I realized it was in fact already late fall. I could feel the coolness in the air while standing on the hill top during a hiking trip in the Tai Lam area two days ago. The Tai Lam Country Park was in a horrified state after the recent disastrous hill fire. In fact the entire area was burnt to the ground with total loss of trees, leaving only small patches of bushes un-touched near the gully floors. As I walked through these patches of surviving greenery, I saw quite a number of butterflies gathering in the bushes, and dead ones at the dried stream bed too. I had no idea if this was the result of the destruction of their natural habitat by the fire, or was just the beginning of the normal winter gathering habit of the butterflies.

According to my friend, there was a gathering of the butterflies on the otherside of territories too, so many that it could be described as “covering the entire hillside”. I had seen this kind of situation too, but that would normally happen in the late Decembers.

Most species of butterfly die in winter. After having completed their life cycle by laying down clusters of egg at the end of the season, they have come close to exhausting their life and strength, and die as the temperature drops. Some species do gather in flocks and survive the winter in their adult form. In order to escape from the cold weather, they migrate like birds, stay in the warmer valleys in the south until the winter ends. A few spots in Hong Kong have been known to be the sites of such “Winter Butterfly Valleys”. Some stay in these valleys for the whole winter, but some (like the Common Tigers) continue their southbound journey after staying for a few weeks. Only those survive the winter are able to produce their offsprings in the coming spring back in the north.

I have had the privillege to visit one of the winter butterfly valleys in Siu Lang Shui with the local butterfly specialist Vor Yiu years ago. In the winter drizzle, the sight of tens of thousand of Blue-spotted Crows hanging on trees all over the hill-side was turly spectacular, but the valley floor covered by thousands of died butterflies was a much more shocking scene. After flying for thousnads of miles and hoping to escape from death by freezing, their exhausted bodies were eventually unable to survive the cold winter shower. By looking at that horrifying scene, one could not stop thinking how fragile life could be.

In order to take photos of a spectacular scene, some people would make the exhausted butterflies fly by disturbing them. I strongly against this kind of activity, since that will be a further and fatal drain on their already weakening strength.

In the romantic Chinese legend of the Butterfly Lovers, Liang and Zhu ended their own life in order to escape from the controls of their fathers and the patriarchal society, and transformed into a pair of butterfly, staying togather forever. However, the survival of a butterfly is by no means close to romantic but brutal in real life.