Floating Village within a Metropolis 繁華都市中的水鄉風情 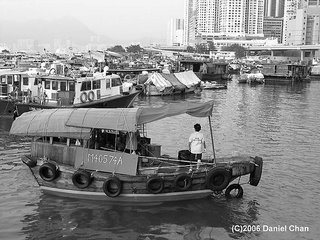 Floating Village within a Metropolis

Start functioning since 1883, the Causeway Bay Typhoon Shelter is the oldest among the many typhoon shelters in Hong Kong, It used to be the most colourful and lively hub of floating restaurants at night, serving delicious seafood and fishermen-style congee (rice porridge) prepared by the fishermen at their "kitchens-on-the-sea", accompanied by the songs performed on tiny floating stages.

After several large-scale reclamations and the construction of the Island Eastern Corridor, the size of the Typhoon Shelter shrinked considerably, and so was the floating restaurant business. Still, its unique waterfront landscape and atmosphere of a floating village within a metropolis somehow manages to linger on.

However, the recent draft Wan Chai North Outline Zoning Plan has proposed a further 2-hectare reclamation along the waterfront for a Harbour Park, which would permanently change the face of the waterfront landscape. Although the Harbour Park proposal was later removed from the OZP, the proposed Central-Wan Chai Bypass and the Island Eastern Corridor Link still require "adequate extent" of reclamation within the typhoon shelter, not to mention the addition of a artificial sandy beach.

In any case, the unique waterfront landscape of the Causeway Bay Typhoon Shelter will be lost permanently.

Email ThisBlogThis!Share to TwitterShare to FacebookShare to Pinterest
Labels: 吾土吾家 My Home Town